The people you meet–that’s got to be one of the most rewarding benefits of running any business. For example, a few years ago, I met Gordon Hopper at a local retirement community where he had taken up residence. The task was to set up his new computer and printer, Internet access, and get him started with his system. After all was working properly, Gordon sat down in front of his Internet browser and asked, “How can I find out about something?”

Back to Gordon in a moment. I have always been intrigued by submarines, especially the role they played in World War II in both the Atlantic and Pacific theaters of combat. One of my favorite movies is “Run Silent, Run Deep,” adapted from a novel of the same name, in which Clark Gable gave one of his final cinematic performances. So it was no accident that many years ago, when the company I was working for at the time sent me for a week of training in San Francisco, I took time to visit Fisherman’s Wharf and tour the Pampanito, one of the last surviving submarines from WWII. 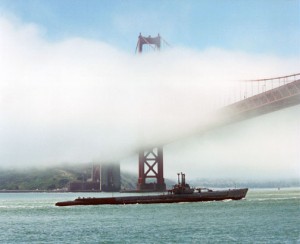 Now back to Gordon. We had set up Google as his preferred search engine, so I just suggested that he click in the address bar of his browser and start typing some key words pertaining to what he wanted to read about. As I watched, he typed the letters “P-a-m-p-a-n-i-t-o.” Long-ago memories came to me and I remarked, “Pampanito? I have been on board the Pampanito!”

Gordon replied, “So have I. I lived in her for four years.”

This remarkable man had been on Pampanito’s crew during the entirety of her six war patrols in the Pacific during WWII.

In the months and years since, I met and talked with Gordon several times and would like to think that we became rather good friends. He was one of many thousands who made the great sacrifice of going to war for his country at a turning point in history. Like one of many thousands, he returned to pick up his civilian life, pursue a successful career, raise a family, and become a blessing to the rest of us with his knowledge, wit, wisdom, and kindness. Unlike many other thousands of his comrades in battle, he had to grow old.

Gordon’s name (misspelled) appears on this page, which details Pampanito’s third war patrol. You can find links there to historic photographs–and even some silent motion-picture footage–of that patrol.

Yesterday, Gordon Hopper passed away. I will miss him. You should, too.